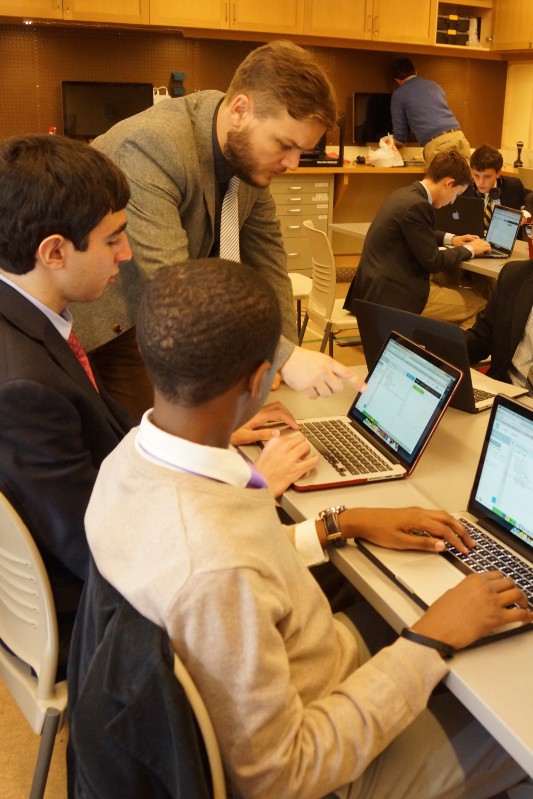 Aaron Grill, Experienced Computer Science Educator, on Why CodeHS Was His Silver Bullet

More and more of Aaron Grill’s students want to take a programming class. And he believes that interest is only going to grow. “Kids are intrinsically more interested in computer science — it’s the culture of today... it affects everyone’s life every day. They all have phones and laptops, they all understand that there is another language they need to speak in order to communicate or produce something that is meaningful.”

Aaron Grill is an experienced computer science educator. There are two things that drew him to CodeHS. First, it saves him a ton of time. Second, it’s scalable.

Mr. Grill is a busy teacher with a lot on his plate. Teachers tend to be that way. With dozens of students across various classes, staying on top of student work and leveraging time both in and out of the classroom is extremely important. Aaron likes to use tools that help him spend his time efficiently and effectively.

Aaron studied computer science in college but always wanted to go into education. (There are not enough people like him!) About twelve years ago, he started teaching elementary and middle school students the basics of computers using tools like Scratch to program video games. He then helped build out a K-6 technology curriculum and eventually started teaching in the middle and high school as well.

Aaron began teaching Java, using the programming methodology produced by Stanford. He experimented with the flipped classroom model for the AP course. The students watched video lectures at home and did hands-on exercises and projects during class time.

While teaching those computer science classes, he noticed a few things. First off, Aaron always found himself getting bogged down in grading. Each time a student submitted a program, she would have to export the code into a zip file, send the file via email to Mr. Grill who would then import the program and run it on an integrated development environment like Eclipse, which would have to already be downloaded and installed on his own computer. After running and grading the student program, he’d have to do the same process to get it back to the student. Now multiply that by a bunch of programs with a bunch of students across a bunch of classes. It took a lot of time.

So Mr. Grill was in the businesses of looking for better tools to use in his computer science classes. Blended-learning programming websites began to pop up, which meant that all of the code that previously lived on each student’s computer and within downloaded software, suddenly could be run through the web-browser and accessed from any computer. Instead of exporting and importing those files and requiring a software download to run programs, all you’d need is a modern web browser to run code. That was a huge first step.

However, things really clicked when he came across CodeHS. With both the online coding environment for the students and the teacher-facing tools to help manage his classes, run student programs and grade student work, Aaron Grill found exactly what he was looking for to help him teach classes — and more.

Dealing with the student workflow became much easier with tools that allowed him to visualize student progress, run student code, grade student work, and leave helpful comments and feedback to students. Logistical things that used to eat up all of his time were stripped away.

In addition to the tools that made grading easier, Aaron has access to an extensive library of resources including programming exercises, problem guides, lesson plans, and exercise handouts, which he uses to prepare for class and assist his teaching.

Aaron says that “even as an experience computer science person, these resources are incredibly helpful!” Having class materials not only cuts down on the time he would otherwise have to spend creating the resources himself, it allows him to spend more effective one-on-one time with students and he feels confident and supported going into each lesson.

Teachers shouldn’t have to reinvent the wheel. They should be able to help students learn.


CodeHS is Replicable and Scalable.

“For district administrators, CodeHS is a silver bullet!”

Aaron Grill says that, “for district administrators, CodeHS is a silver bullet!” He feels less limited by finding a teacher with an extensive computer science background, because he believes a math teacher can work through CodeHS and feel confident going in to teach computer science the following year.

The structure that CodeHS provides helps the computer science program that Aaron is building maintain consistency even if new and different teachers are teaching the courses. It also means that the program is scalable to more teachers.

Of course, it’s not only about what makes Mr. Grill’s life easier — it’s also important to engage the students. After trying countless textbooks, Aaron saw that students were unable to absorb information when it was presented in vexingly long paragraphs of text. According to Aaron, even other sites that tried to teach coding haven’t achieved the effective pedagogical breakdown of concepts that he says CodeHS has. “CodeHS is broken down really sensibly for the specific high school age group!”

"CodeHS is broken down really sensibly for the specific high school age group!"

As all computer science teachers will tell you, Aaron’s students do get stuck and they do get frustrated. It’s the nature of learning to code. However, CodeHS has been far more successful in helping students complete small tasks and overcome conceptual hurdles. Aaron describes this process as finding “success through failure”.

After taking the Introductory Computer Science course using CodeHS, Aaron Grill has watched his students develop an understanding of the basics of programming, which translates into an ability for those students to look at another piece of technology, like the Oculus Rift, and have a basic idea of how it could work. Variables, methods, data structures — they get it!

At the end of the day, when you see that spark of understanding take hold and the student becomes more interested in continuing computer science, that’s incredibly inspiring.

Tell us about your class and be featured on CodeHS! Teacher Feature Survey